Cyanobacteria are photosynthetic microorganisms that use CO2 as carbon source and sunlight as energy source. Although phototrophic cultivation is widely used in cyanobacterium production, heterotrophic and mixotrophic cultivations attract attention among researchers. In this study the effect of different concentrations (0[control] - 0.25 - 2.5 - 10 - 50 mM) of sucrose on the growth of Arthrospira platensis under mixotrophic cultivation was investigated. The purpose of this study was to investigate whether A. platensis biomass production could be performed regardless of high light intensity. Biomass, chlorophyll, lipid and carbohydrate contents were determined by spectrophotometrically. Also the physicochemical properties of the produced cyanobacterium were investigated by FTIR, TGA and DSC.  The highest biomass productivity was detected as 1.33 g/L/day in the medium containing 2.5 mM sucrose and the specific growth rate increased 1.32 fold as compared to phototrophic culture. Additionally, the highest lipid content (3.68 ±0.17 mg/g cell) was determined in the same medium. This suggests that A. platensis has adapted to the medium that contains low sucrose concentrations. Also, this study showed that sucrose containing medium supports lipid production. 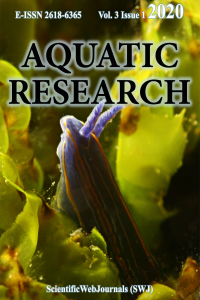