Crustacean and Protozoan parasites of some Cyprinid fish living in the Murat River (Bingöl-Türkiye), with new host records

Some Cyprinid fish species: Cyprinion macrostomum (Heckel, 1843), Capoeta umbla (Heckel, 1843), Chondrostoma regium (Heckel, 1843), and Squalius cephalus (Linnaeus, 1758) living naturally in the Murat River, were investigated for Protozoan and Crustacean parasite fauna and their distribution. Fish samples were collected from different stations between July 2017 - June 2019, examined in the Bingöl University Zoology Research Laboratory, and the data were explained with various variables. The normality test revealed that the data were not normally distributed (p< 0.05), as with large samples, so non-parametric tests explained the data. A total of 365 fish were examined, and 100 fish (27.4%) were infected with at least one Protozoan or Crustacean parasite. Four different parasite species were recorded on the examined fish, namely Ichthyophthirius multifiliis and Trichodina sp. belonging to the phylum Ciliophora (Protozoan), Ergasilus sieboldi, and Lamproglena pulchella belonging to the phylum Arthropoda (Crustacean). As a result of this study, for the first time, Protozoan and Crustacean parasites of different cyprinid fish were examined according to the host species, seasonal distribution, host size, and new host records were reported for three parasites. 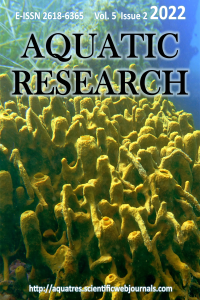