The aim of the study was to determine a considerable level of mortalities occurred in rainbow trout fry (Oncorhynchus mykiss) cultured in a research hatchery located in Marmara Region/Turkey. Totally 18 individuals (1-8 g) were investigated by using bacteriological and mycological methods. The affected fish showed skin darkening, prolapses and fungal mats at the base of the fins. According to morphological and biochemical characteristics of the isolates, all of them were identified as Aeromonas sobria. Saprolegnia sp. was also observed in squash preparations of the skin. All isolates were determined to be sensitive against florfenicol, enrofloxacin and ciprofloxacin. Histopathologically, vacuolar degeneration, haemorrhage and hyperaemia in the liver, tubular necrosis, periglomerular edema, and multifocal melanomacrophage deposits in the kidney and depletion of white pulp in the spleen were determined. Distal type epithelial cells hyperplasia was also observed in the gills. In diseased fish, motile Aeromonad septicaemia was described and Saprolegnia sp. was also detected in fins and skin lesions but it was considered to be a secondary infection. 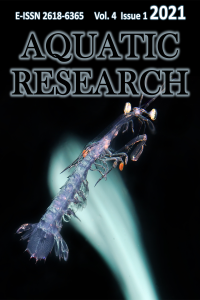