The purpose of the present study was to determine the influence of three different feeding methods on the growth performance and survival rate of European perch (Perca fluviatilis L.) cultivated in recirculating system during its transition from natural food to pelleted feed. During the transition from natural food to formulated diet, the feed of the fish from group A was supplemented by chopped earthworms, while that of group B - with frozen bloodworms. The perch from group C were fed dough-like feed, obtained by adding of liquid betaine. The final body weight of the perch from the three groups was as follows: A- 18.99 ±5.73 g, B- 18.49 ±5.30 g and C - 18.06 ±5.14 g, as the differences were not significant (P>0.05). Similarly, in regard to the survival rate, the groups did not differ. The FCR in the group fed earthworms was 1.05 ±0.02 and it was lower than that of the groups receiving bloodworms and betaine in the diet by 1.11 ±0.02 and 1.30 ±0.06 respectively. Significant influence of the method of feeding (Р≤0.001) was found in regard to this trait. 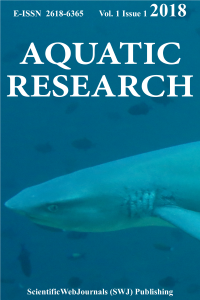